In a time when the volume of online content is exploding, it can be difficult to be unique and stand out. Harnessing the power of real-time content is one way that brands can capture the attention of their audience.

We can use the term “real-time” content to describe everything from live-streaming video to branded content that’s related to a current trend or world event.

Content planning for real-time marketing can be more challenging than other types of content. This is because real-time content opportunities often pop up out of nowhere and typical production workflows may have to be truncated. But, it’s ok that real-time content isn’t always meticulously planned. You can produce live stories on Instagram, for example, on the fly with very little forward planning.

Even if it takes a frenzied effort to produce this kind of content, the results are worth it. Seventy-six percent of marketers in a study by Smart Insights reported that real-time content increased their audience engagement. Another 25 percent believe it increases their conversion rate and ROI.

If you’re looking for some ideas and inspiration for how to get started with real-time content, these examples are a great place to start. 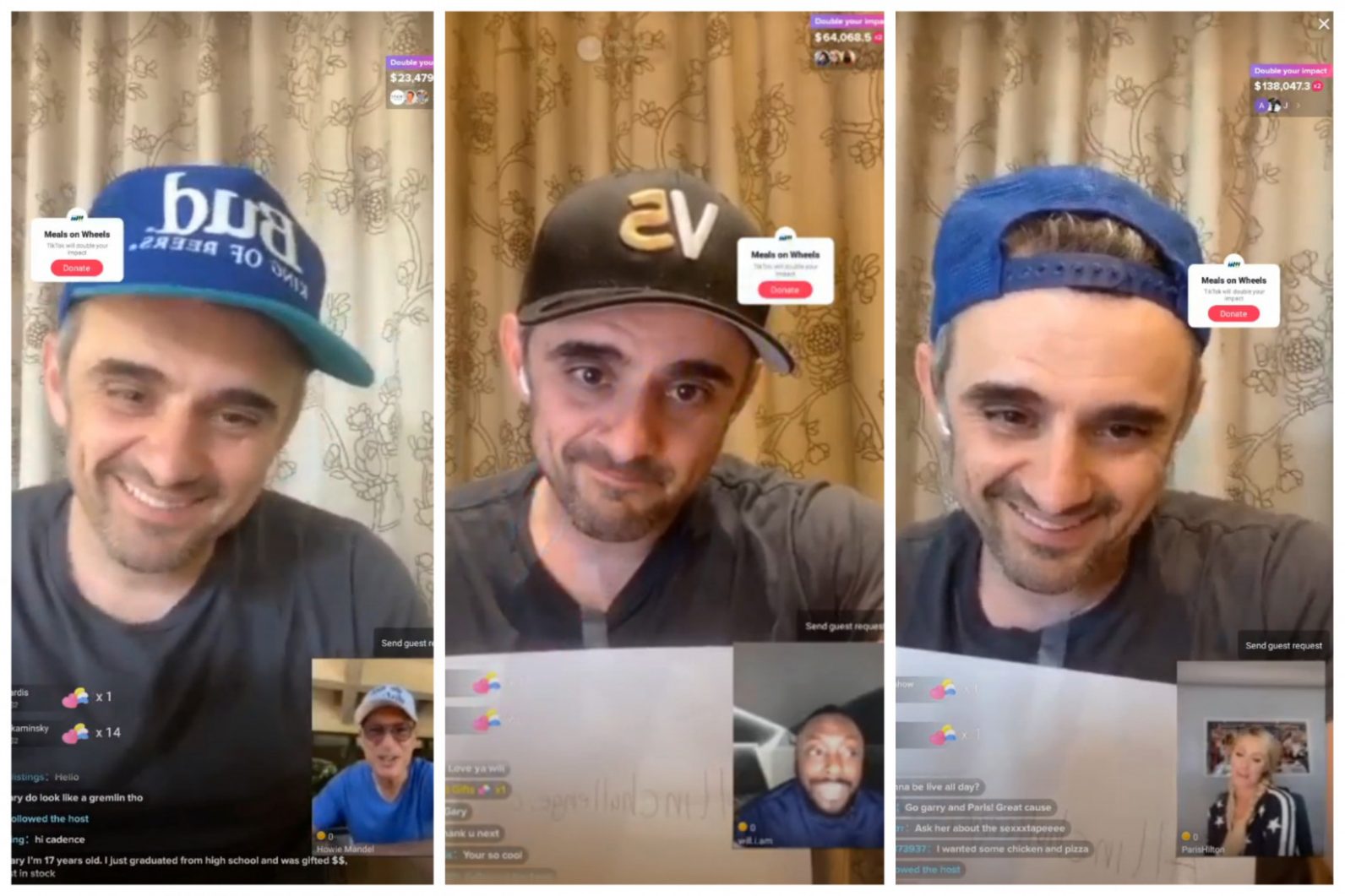 Marketer Gary Vaynerchuck, known as Gary Vee on social media, is a great example of how persistence in content marketing can pay off.

Gary started his content marketing efforts creating videos for Wine Library TV, a low-budget vlog to he created to promote his family’s wine business. Over a decade later, he’s the founder and CEO of VaynerMedia — a global digital agency serving big-name clients.

Gary Vee has earned fame as a social media maven, but he’d be the first one to admit there’s nothing special about his method. He simply publishes a lot of high-quality content and the benefits speak for themselves. Vaynerchuck now has millions of followers across several platforms and multiple successful businesses.

With a love-him-or-hate-him approach and personality, not everyone is listening to what Gary has to say. But you’d do well to do some of what he does. Despite sneers from other marketers, he’s been touting TikTok as the next big social media platform since it was still known as “Musical.ly.”

Fast-forward a few years and the growth of TikTok has astounded everyone. It now has over 800 million active users and is the most downloaded app in the Apple app store.

In March 2020, Gary launched the “All In Challenge” — a 12-hour livestreamed telethon on TikTok to raise money for coronavirus relief. With a lineup of guest celebrities and a convenient “donate” button, the event successfully raised $2.3 million for charity.

As well as raising money for a good cause, the live event promoted Gary’s brand, earned media attention, and created buzz on social media. 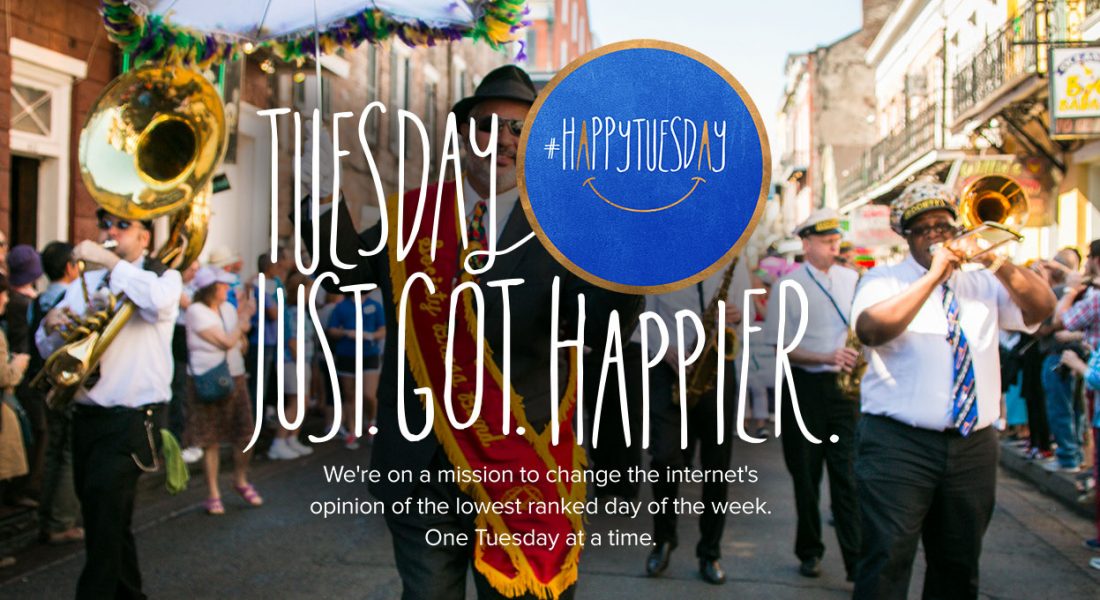 When BuzzFeed published an article claiming that Tuesday is the worst day of the week, the New Orleans Tourism Marketing Corporation spotted a content marketing opportunity.

New Orleans is of course famous for its Mardi Gras celebrations, which fall on a Tuesday. But their partner marketing agencies FSC Interactive and 360i set out to convince their audience that every Tuesday in NOLA was a day worth celebrating.

FSC and 360i created a team to monitor and respond to Twitter users on Tuesdays. They identified users who seemed to be having a bad day and created a personalized post for each of these users with suggestions on how to improve their day.

The video team from 360i also took video clips of NOLA locals to include with the messages. They even followed some up with a gift of New Orleans goodies a few weeks later.

The campaign was a huge success, with over 245,000 impressions and over 1,400 engagements in just two days. It also managed to attract media attention, including BuzzFeed. The BuzzFeed team accepted an invitation to explore the city on a Tuesday for 24 hours and published their adventures as a feature article.

GoT Quest for the Throne Scavenger Hunt

The Game of Thrones finale was eagerly anticipated by millions of fans worldwide. Many savvy marketers made sure not to waste this opportunity.

An unprecedented number of brands jumped on the GoT trend and built marketing campaigns around the franchise.

Some memorable examples include:

·      Mountain Dew’s limited edition “A can has no name” cans, which revealed Arya Stark’s kill list when chilled.

·      Tourism Ireland’s “Glass of Thrones” campaign, in which they commissioned and installed a series of six stained glass windows around Belfast. By the time of series eight, the windows formed a trail across the city, leading fans to the final window at Titanic Studios.

But let’s not overlook the marketing efforts of the show itself! The GoT team is an expert at content marketing. They cleverly release just enough trailers and teasers to get fans excited for the next season.

In the run-up to the Game of Thrones finale, HBO launched a scavenger hunt. This gave fans the opportunity to search for six replica Iron Thrones in the real world.

HBO published clues on the official GoT website and released clues in content over social media with the hashtag #forTheThrone.

The campaign was hugely successful in generating buzz. But it also resulted in some great user-generated content as fans documented their quest to solve the clues.

As an integrated content marketing platform, DivvyHQ makes it easy to manage real-time content campaigns. From initial ideas through to promotion, automation, and performance analytics, you’ll have all the tools you need to succeed. Try it FREE for 14 days here.

The Rise of Real-Time Content: 3 Examples to Inspire Your Content Planning2020-07-132021-02-26https://divvyhq.com/wp-content/uploads/2015/04/DivvyHQ-Logo-Final-no-icon.pngDivvyHQhttps://divvyhq.com/wp-content/uploads/2020/07/real-time-content_1672px-604x270.jpg200px200px
About
Danka Jankovic
Danka spends parts of her day figuring out how to combine her two loves: Cooking and Netflix. The rest of the time she works with companies of all sizes to make sure they are fully optimized, automated and efficient with their content marketing.
Subscribe to Our Blog
Search
Categories
Most Popular Posts
Archives
DivvyHQ
About
More Info
Connect
Created for Pros by Pros     © 2023 Alluresoft, LLC      Email: contact [at] divvyhq.com     Phone: 877-573-4889 (USA) or +1-816-298-6119 (Int.)