With over a billion active users, Instagram can be an effective channel to use in your digital marketing strategy. But achieving success on Instagram can also be very time-consuming. Instagram automation tools can significantly reduce this time, but they also have their downsides.

To help you decide if you should use these tools to be more productive with your use of social media, we’ve summarized the pros and cons of using them.

Most businesses will find that automation tools can definitely help them to improve their results and ROI. But relying too heavily on them can backfire.

Using Instagram effectively means more than just posting a photo with a caption every now and again. To build a following and engagement on Instagram, you also need to spend time doing several other activities, including:

All these activities can easily add up to several hours a day, which is why there is such a high demand for Instagram automation tools.

Automation tools can do a lot of these tasks for you after some initial setup, which can be a significant time-saver.

These tools often have filtering options built-in so you can easily engage with smaller target groups. For example, you could choose to follow users only in a certain country or automatically follow all the users who follow a certain account.

An Instagram bot is a subclass of automation tools that are programmed to act like a human user.

Bots follow other Instagram accounts, leave comments, and like posts. The idea behind doing this automatically is that it is a very easy way to increase followers and engagement.

While this isn’t a problem for some users, many bot accounts follow accounts, only to unfollow them later once they’ve followed back. Bot comments are also notoriously easy to spot because they’re so generic.

Influencers and people with a high Instagram following are often targeted by bots and understandably get very annoyed by the influx of spam comments. This, combined with the fact that many bots are actually against Instagram’s terms of service, means that they’ve earned themselves a bit of a bad reputation and could get shut down via spam-reducing API or algorithm changes at a moment’s notice.

There are obvious advantages to using automation tools for Instagram marketing, particularly if your time or resources are limited.

The most obvious benefit of using an Instagram automation tool is that it will save you a lot of time.

Without the help of automation, someone within your marketing or social team will need to commit significant time each day to finding new accounts to follow and engaging with your audience.

Another common reason for using bots and automating interaction with other users is that it can be a very easy way to increase your number of followers in a short space of time. 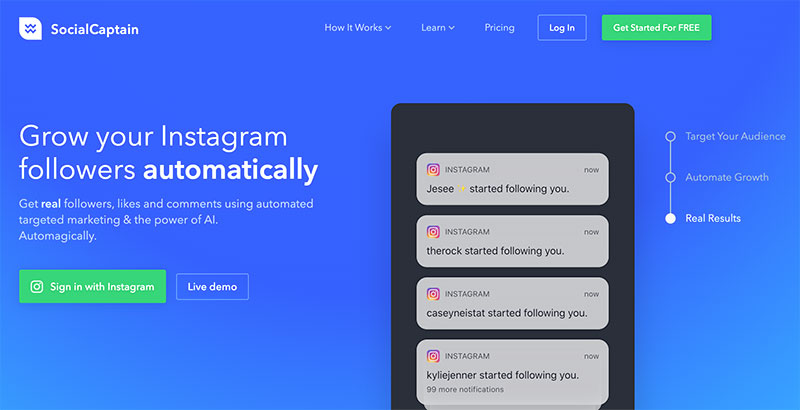 However, be warned that using a bot to raise your follower account artificially will probably not bring you any more real engagement. If you really want to attract people who align with your brand, you’ll have to do it the hard way.

Instagram automation tools are often priced very cheaply and are certainly more affordable than hiring a human to manage your account for you.

We’ve already touched on a few cons of using these tools, but let’s lay them out in black and white.

If you’re using bots to comment on other accounts and sending the same generic message to thousands of people, it’s unlikely to gain you any new real fans.

An experiment managed by HubSpot comparing a bot account to one managed by a human (both with identical content) found that the human-managed account achieved almost 3X higher organic engagement.

Letting a bot loose can also mean you end up leaving inappropriate comments (such as leaving a comment like “love this picture!!!” on a highly personal and heartfelt post.) This can be very damaging to your brand.

Tools are not permitted to use Instagram’s API without permission and cannot be used to manage relationships (such as following and unfollowing accounts). Spam comments are also not permitted.

If you use software that violates the TOS, your account may be banned.

A little automation goes a long way. There’s nothing wrong with using automation to speed up and streamline your workflow – for example, by posting some of your Facebook posts to Instagram automatically or queuing up and scheduling your Instagram posts in advance.

However, using bots and automation tools to try and increase your follower stats and get more people looking at your account is not recommended. Not only is it frowned upon, but it also won’t do much good for your brand or give you any real boost in engagement.

If you want to automate your social media the smart way, opt for a content automation solution that focuses on streamlining workflow and reducing repetitive tasks rather than trying to replace human interaction.

To find out more about the DivvyHQ content marketing platform and how it can help you to manage your content, publishing, and automate promotion on social media platforms in one place, start a free trial today.

Should You Use Instagram Automation Tools?2020-05-212020-05-21https://divvyhq.com/wp-content/uploads/2015/04/DivvyHQ-Logo-Final-no-icon.pngDivvyHQhttps://divvyhq.com/wp-content/uploads/2020/05/instagram-automation-tools_1672px-604x270.jpg200px200px
About
Brody Dorland
Brody leads the DivvyHQ team with nearly 20 years of experience in the trenches of corporate marketing, advertising agencies, entrepreneurship and establishing himself as one of country's top digital marketing strategists. Brody's primary focus is helping companies and marketing agencies shift their mindset, structures and processes so that they will think, act and consistently deliver like publishers.